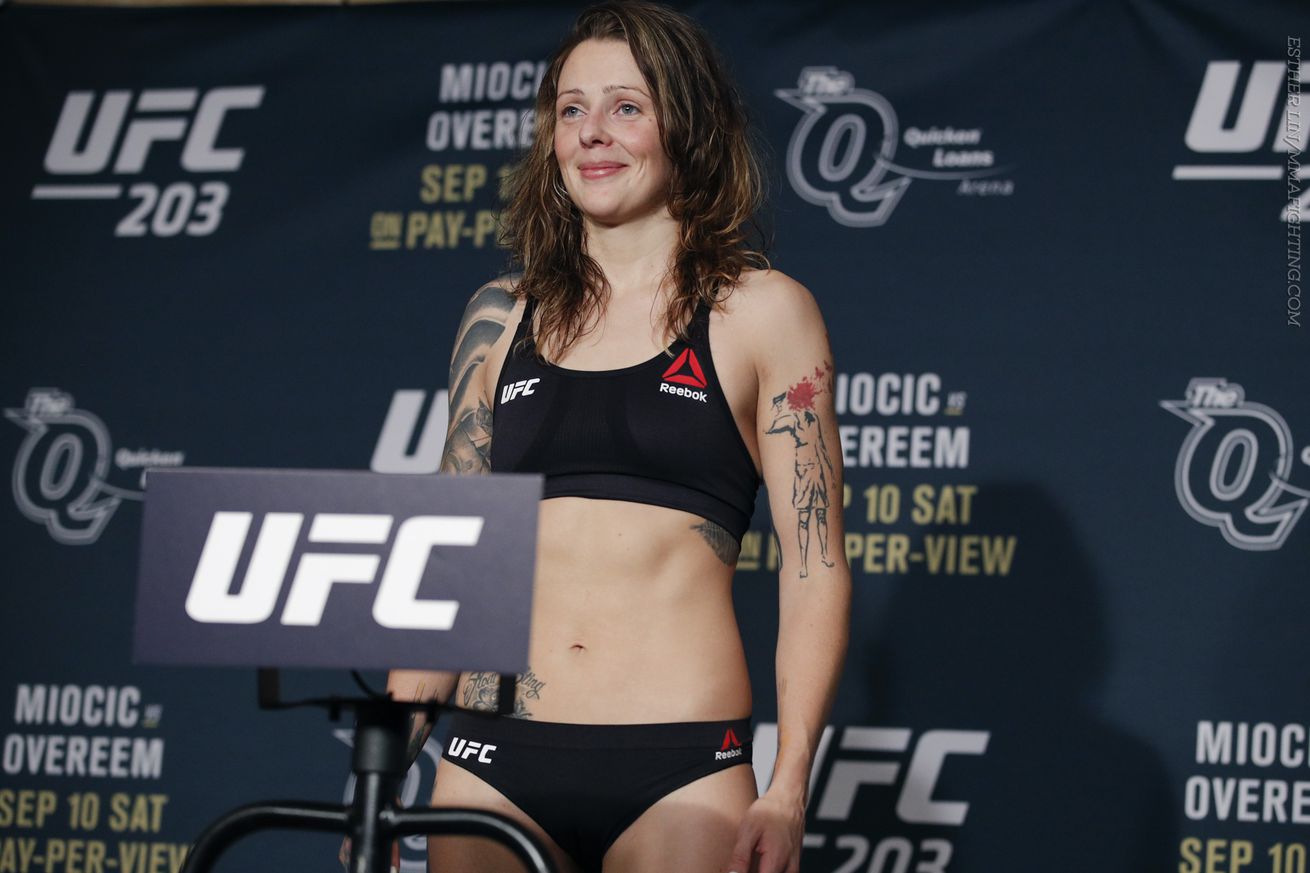 When the UFC announced it would be adding a new women’s flyweight division to its ranks this summer, the thoughts of many turned quickly to Joanne Calderwood.

“Dr. Kneevil” is one of the women who has been most vocal about the need for a 125-pound female weight class over recent years. She is also the only active woman on the UFC’s roster to have actually fought a 125-pound contest inside the Octagon, having done so in a special one-off against now-Bellator fighter Valerie Letourneau last June.

But just days after plans for the new women’s division were made official, the UFC announced a strawweight tilt between Calderwood and undefeated 115-pound prospect Cynthia Calvillo for July 16 at UFC Fight Night 113 in Glasgow, Scotland. And for Calderwood, the surprising turn of events was simply a matter of bad timing.

“I’ve started seeing a nutritionist outside of camp, so I was a little bit more motivated about making 115. So I told him, ‘okay, I’m good for a fight.’ And then, the next day, I find out that [UFC was considering] a 125 division. I was like, ‘ah sh*t.’ But like I said, I can look at these things as a positive or a negative, and I’m going to look at it as a positive because this means I can go put on a good performance in Glasgow, and then who knows? Maybe I’ll stay at 115. But at least there’s an option for 125, but I’ll make that decision after this fight. I’ve committed to this fight and I’m going to do it.”

Calderwood said she already signed her official contract to fight Calvillo at 115 pounds by the time she heard the news about flyweight, so she figured she would just bite the bullet and continue with her plans to make UFC Fight Night 113 the healthiest weight cut of her career, then decide what to ultimately do next once her meeting against Calvillo was behind her.

“I’m just focusing on this fight,” Calderwood said. “I’ve committed to it and I have to make this weight. But yeah, as you get older and have more fights — I’ve been fighting at 115 for all of my career, so yeah, I don’t know. I’ll see how this fight goes, this weight cut goes, and obviously like I said, I’m working with a nutritionist, so I feel like it’s a little bit easier. I just have to reach out and get as much help as I can and make sure I’m doing things right.”

For Calderwood, an unfortunate side effect of her meeting with Calvillo is that its July 16 date precludes her from being able to vie for the inaugural UFC women’s flyweight title, if she so desired. The belt will be up for grabs on The Ultimate Fighter 26, which is slated to begin filming in July. The structure of the new season will be nearly identical to the season Calderwood competed on in 2014, The Ultimate Fighter 20, which crowned an inaugural UFC women’s strawweight champion.

And while many past TUF competitors have commented that they would never compete on the grueling series a second time, Calderwood would have been more than willing to dive back into the experience for another go-round.

“Especially at 125, yeah,” Calderwood said. “That whole seven weeks I was in the house, all I could order was eggs and spinach, so can you imagine if I was fighting at 125? I could be having, like, lobster and sh*t.

“I feel like I’m a better person now,” Calderwood added. “A lot of things have changed in my life, so I would see it as a positive thing and I would go in (wanting to) enjoy it more. And, depending, I don’t think all the girls that were in the house would be going back in, because some of them have kinda disappeared and some of are still fighting but I doubt they’d be in the house, so maybe it’d be a different group, hopefully talented up-and-comers.”

In the meantime, Calderwood is simply focused on what she has in front of her. Calvillo is a tough opponent who the UFC appears to have pinpointed as a potential star, meaning a win at UFC Fight Night 113 would put Calderwood in a good position moving forward.

Still, Calderwood admits that the secrecy of everything regarding the new 125-pound class has been a bit frustrating.

“I would like to know these things, but I guess they have to keep their cards close to their chest as well,” Calderwood said. “But it does kind of frustrate me a little bit, because I see myself as a business and I’m an athlete. I need to know my plans. It would be good to know what would be next after Cynthia, or that kind of thing, but I guess it’s just part of the sport, you never know.”