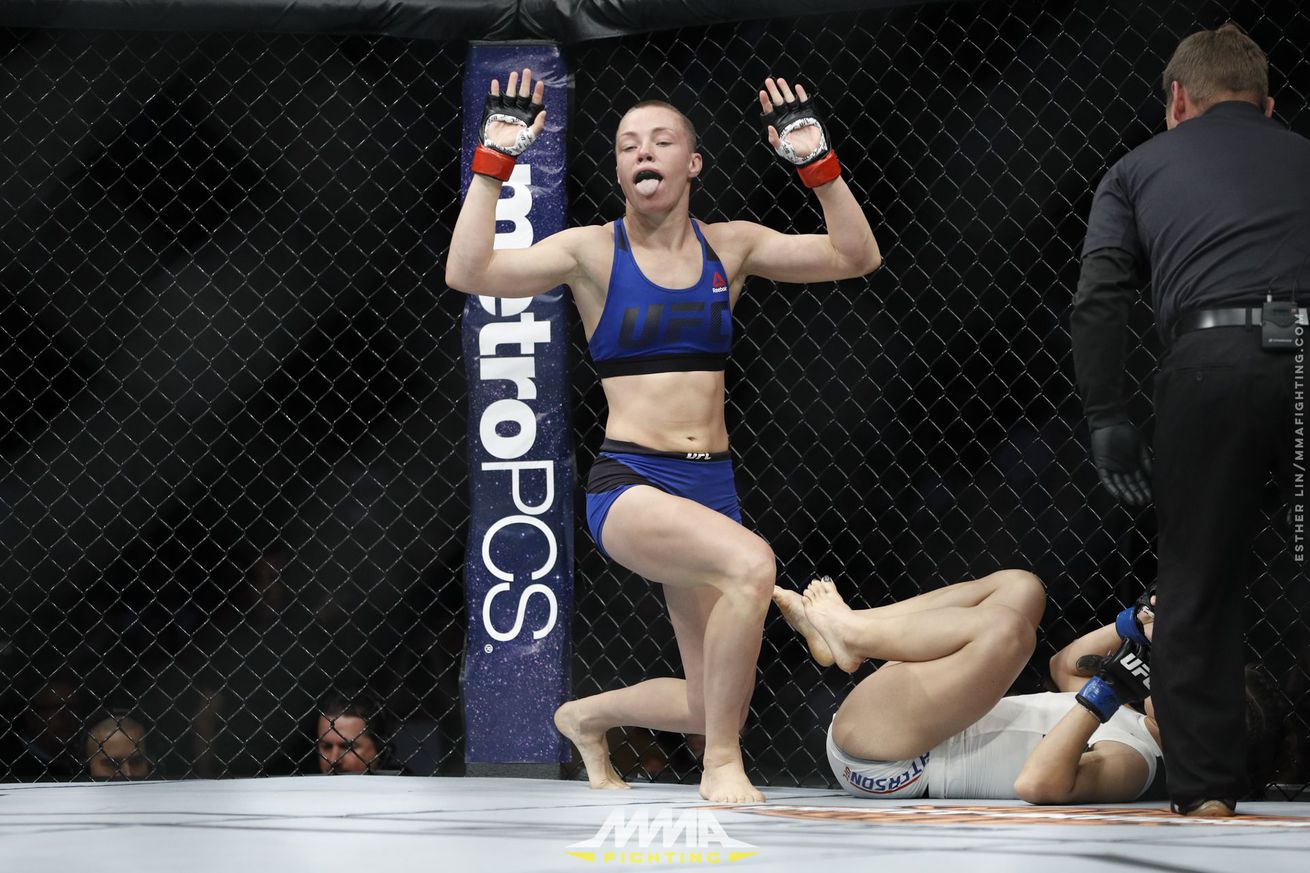 Rose Namajunas is coming for the UFC strawweight championship.

“Thug Rose” improved to 4-2 inside the Octagon with an impressive second-round submission victory over Michelle Waterson at UFC on FOX 24 in Kansas City, and says that her relationship with UFC champion Joanna Jedrzejczyk got weird because the titleholder realized she’s “a threat” to her reign.

In a recent appearance on The MMA Hour, Jedrzejczyk picked Waterson to beat Namajunas, then recalled the day she met Namajunas at a UFC event.

“The thing is, like, I met her in Denver,” Jedrzejczyk said. “We shake hands, we spoke to each other. And two days after, I heard that she was like, ‘oh, I want to beat Joanna.’ Shut up. You had your chance to beat Karolina (Kowalkiewicz) and Carla Esparza before, and some others, but you just lost. Come on. Work hard, get your ass to the gym, put on better fights, and you’re going to get this title shot.

“But be honest. If you don’t like me, don’t shake my hand and don’t talk to me. Don’t talk behind my back. I’m kind of a straight person and this is what makes me mad. I’m good with that, but I think Michelle Waterson will [beat] Rose.”

Fresh off her win over Waterson, Namajunas called her meeting with the champion “just an awkward encounter” where the Polish star went for a hug while Namajunas expected a handshake.

“There’s just the way I am,” Namajunas said on Monday’s edition of The MMA Hour. “I respect my competition. I think I don’t have to hate somebody in order to fight them, so, yeah, why wouldn’t I wanna fight her? She’s the champ. I wanna fight the best.

“Joanna, we’re cordial,” Barry said. “They know they are gonna fight each other. She’s the champ, Rose is the challenger. When you see each other, you say hi because [Namajunas] is a decent human being. She says ‘hello, good morning, how’s your day going?’ She’s a cordial, decent human being. Ariel, you’re the man, I’m a good friend of yours, but if you’re the champ, I’d wanna fight you too. You’re the best and I wanna fight you. It’s respectful. That’s a compliment.”

According to Namajunas, the UFC didn’t make it official that she’s next in line for the strawweight gold against the winner of UFC 211 co-main event Jedrzejczyk vs. Jessica Andrade, but she still believes “it’s pretty obvious” she’ll face whoever wins on May 13.

“Thug Rose” will be in Dallas to watch the title fight live, and guarantees she’s not rooting for Jedrzejczyk to win so she could be the one to dethrone her.

“It doesn’t matter to me,” Namajunas said. “Her style is very exciting to match-up for me, that will be a great challenge. But if she doesn’t win, then she’s not the best after that point. It’s not attached to that person. It’s nothing personal. I just want to fight the best.”