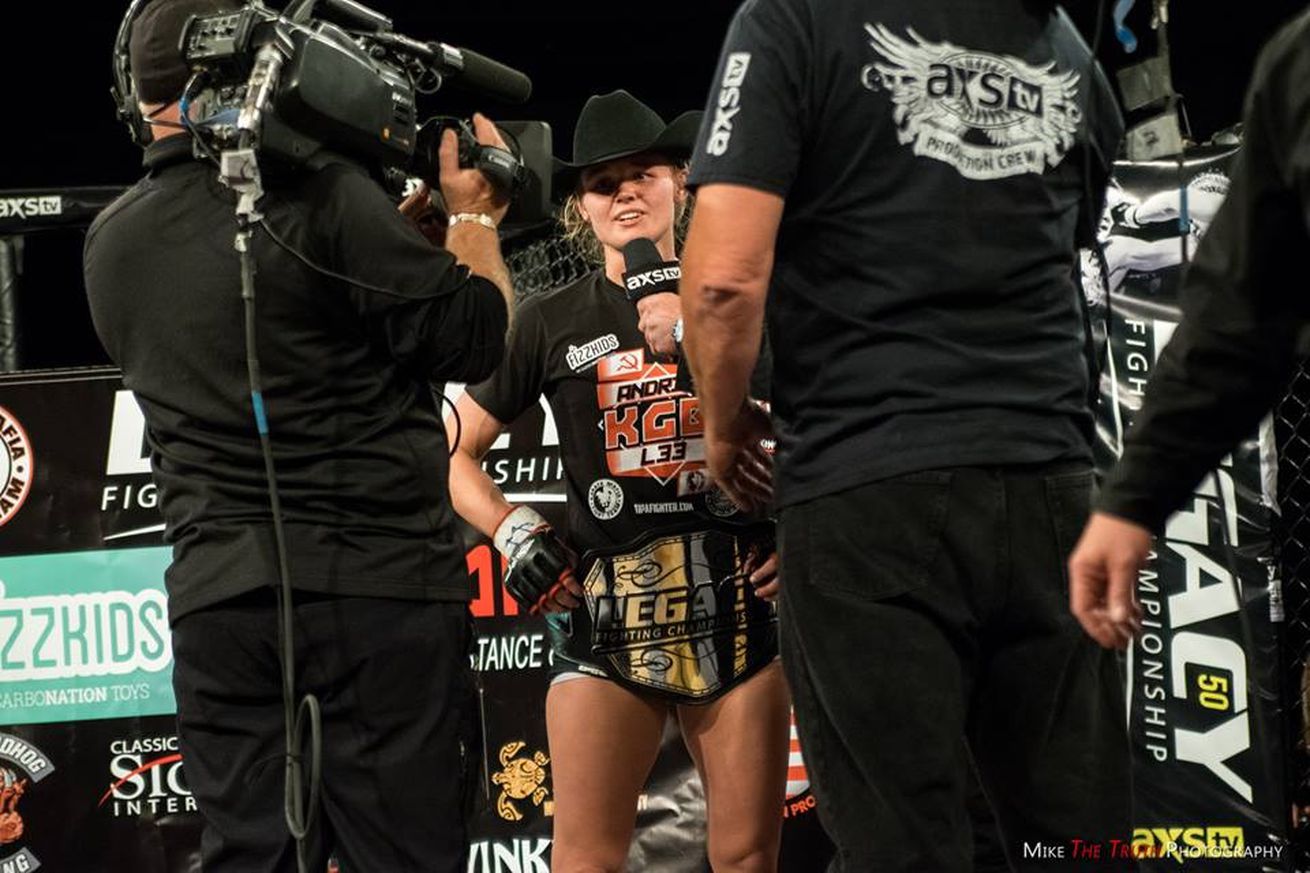 Andrea Lee is not Russian, so don’t make any hacking jokes. Her “KGB” nickname is just that: a nickname.

Lee’s husband and coach Donny Aaron and others at their Shreveport, La., gym used to say years ago that she, with her long blonde hair, looked Russian. Aaron started calling her “KGB,” because it was catchy and flowed well with her last name. It has become a well-known moniker.

And that cowboy hat Lee wears to the cage? That’s an homage to her Texas upbringing. But it was also Aaron’s idea. They both knew from very early on that if a fighter can do something to stand out — make himself or herself unique — it would be beneficial down the line.

“Donny was the mastermind behind that,” Lee told MMA Fighting. “He felt like people aren’t going to remember your name, but they’ll remember the girl with the cowboy hat.”

It worked, of course. Now she has a hat sponsor, hooked up by her friend Donald Cerrone.

Lee herself is becoming a familiar name in the world of women’s mixed martial arts. On Friday night, she’ll look to become the first Legacy Fighting Alliance women’s flyweight champion in a fight with Heather Bassett at LFA 4 in Bossier City, La. Lee was previously the Legacy FC women’s 125-pound champ and also competes for Invicta.

Lee credits a lot of her growing profile to the work she has done outside the cage to help draw recognition. She’s active on social media and gets that people are almost as interested in her personality, lifestyle and good looks as they are in her fighting ability.

“When I first started getting my name out there and getting recognized, I realized real quick it was because of how willing I was to do an interview here or do a photo shoot here.” -Lee

“Since the beginning, when I first started getting my name out there and getting recognized, I realized real quick it was because of how willing I was to do an interview here or do a photo shoot here or work with these people,” Lee said. “It’s really helped out a lot. I see it online, through social media. I see people talking about me and throwing my name out there a lot. Any time that I do an interview, that of course it’s going to be thrown on Facebook and Twitter and promoted like crazy.”

Lee, 27, has nearly 22,000 likes on her Facebook page and nearly 20,000 followers on Instagram. Those numbers are comparable to many fighters in the UFC and she has done it without the UFC media push.

One day, Lee hopes to be in the UFC herself, but that would depend on the promotion opening up a 125-pound division for women. Right now, the UFC only has female weight classes at 135 and 115 pounds. If given the call, Lee said she’d be willing to be one of the marketing focal points of women’s flyweight.

“They’re gonna need a face for the 125-pound division,” Lee said. “I know Joanna Jedrzejczyk, she wants to move up to 125, but she’s already the face of the 115. I think they need a new face for the women’s 125 division. I’m hoping that’s me. I’ve just gotta go out there and show that I can kick ass and prove that I can be that person. I have to do a lot of things in order to get there. For sure, I think I can be a good face for the 125 division.”

Going for the #KGB theme in this #photoshoot, more to come. I really enjoyed doing this photo shoot, it was a lot of fun playing dress up. #invictafc #legacyfc #legacy #mma #wmma #kgblee #andreakgblee

Lee (5-2) is content right now competing for LFA and Invicta. She’s coming off a devastating first-round knockout of Jenny Liou at Invicta 21 last month. Lee landed a buckling left hook to the liver that folded Liou up. It was a good reminder that Lee is every bit as entertaining in the cage as she is on social media. Before that bout, “KGB” was serving a nine-month suspension after testing positive for an illegal diuretic in Nevada.

LFA is making it no secret that it wants to push Lee. Her fight against Bassett is the co-main event on a card headlined by a featherweight title fight between UFC veteran Damon Jackson and Kevin Aguilar. Lee has a chance to be one of the biggest stars in the promotion, if she isn’t already.

That’s because Lee is also not just content with being another pretty face in women’s MMA. She is a legitimate martial artist, a multiple time boxing, kickboxing and Muay Thai champion. Lee is not only a striker, either. She won the Legacy title with an armbar and owns a victory over Rachael Ostovich in Invicta with the same submission.

Bassett, too, is well rounded. Lee is the favorite in the fight and she is aware of that. But she’s also cognizant that might not necessarily play in her favor. Lee knows a big win at LFA 4 would advance her momentum.

“I’m hoping and praying to go undefeated this year,” Lee said. “This fight, it might not be the most dangerous fight, but those are always dangerous — I’m expected to win and to lose to somebody that you’re supposed to beat, that would look bad. Nothing against her. This is definitely an important fight for me. … I’m not gonna underestimate her.”

Lee has the outside-the-cage stuff down pat. On Friday, she has a chance to cement herself as a future star at flyweight with an impressive showing. In MMA, entertainment and in-cage performance go hand in hand. Lee is working on putting both together effectively in her journey toward stardom.