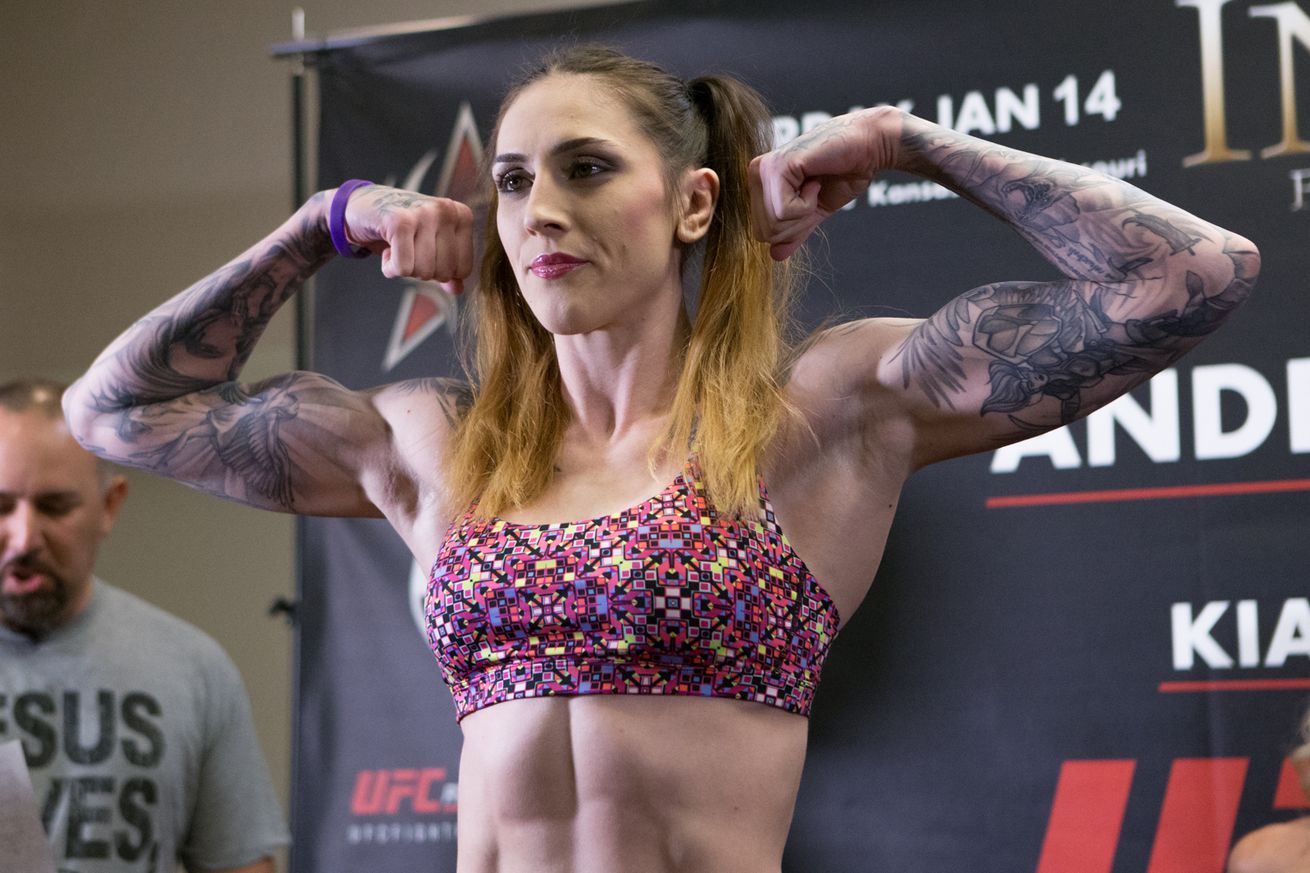 There has never been a better time to be a 145-pound female MMA fighter than right now.

First up is an interim Invicta women’s featherweight title fight between Megan Anderson and Charmaine Tweet in the main event of Invicta FC 21 on Saturday night in Kansas City. Cris Cyborg is currently still the Invicta champ, but is in limbo. Her last two fights were in the UFC and now she’s facing a drug suspension from USADA.

Ironically, Cyborg, the best women’s featherweight fighter in the world, is not a part of any of the three title fights. But Anderson sees it as a chance to get the rest of the division some spotlight.

“This is a very exciting time for the featherweights,” Anderson told MMA Fighting. “I think it’s finally been given the opportunity and the recognition that it should have gotten a long time ago. I think us female athletes in the featherweight division are ready to showcase why the UFC are making the right decision.”

Anderson, 26, is the top prospect of the bunch. She has won her last three Invicta fights via knockout and, at a statuesque 6-feet tall, is a dream for UFC marketers. The Australia native thinks there’s a strong chance she could be in the UFC before the end of 2017. The winner of her fight with Tweet this weekend, she said, will get a jump start to that next level.

“I think they already know who they want,” Anderson said. “They already have names that they’re looking at. I think this fight is just who is fast-tracked higher than the other. I’m sure that both of us will be in the UFC at one point. It just depends on this fight. I feel like it’s going to [determine] who’s gonna go first.”

Anderson (7-2) debuted for Invicta in September 2015, falling by second-round submission to veteran Cindy Dandois. Anderson then decided to stay in the Kansas City area (nearby Lee’s Summit) and train at Glory MMA & Fitness with the likes of UFC fighters James Krause and Tim Elliott. She hasn’t been home and has been training there ever since. The move has hastened her development as a fighter exponentially.

Win or lose against Tweet, Anderson will be paying very careful attention to the bout next month between Holm, the former UFC bantamweight champ, and de Randamie. Those are legitimate future opponents for her now.

“I feel like I match up very well with both those girls,” Anderson said. “That’s two fights that never would have happened without the 145-pound division being implemented. I feel like they will be fireworks fights. I think I’m ready for that level. On Saturday night, it’s just about me showcasing why I should be on the top, why I should be on that level and getting the exposure the featherweights should be.”

After crowning a champion at UFC 208, the promotion will surely need to fill the division at least a bit. And Anderson knows she can put herself on that short list — and gain some gold to boot — by beating Tweet.

“That would be a massive opportunity,” Anderson said. “It’s something that, as a fighter, the UFC is the top organization. For me to be able to get there, it’s definitely a dream and I’m going to do everything that I possibly can to get there.”

Anderson doesn’t know what the outcome of Cyborg’s USADA situation will be, but understands that her path is very influential for the rest of the 145-pound division due to her standing at the top. Anderson thinks Invicta needs to decide if it wants an interim belt moving forward or if Cyborg will ever return to the promotion.

“Every day it’s something different with Cris. I respect the hell out of her. She’s been a pioneer in the sport, but every day is something different,” Anderson said. “She wants to fight in the UFC, she wants to defend the [Invicta] belt, she’s doing this, she’s doing that, she doesn’t want to fight unless they bring in a 145 division. Her first two [145] fights, she turns them down. Well, OK. It’s very confusing. Every day I read another article that comes out with her. OK, something new today.”