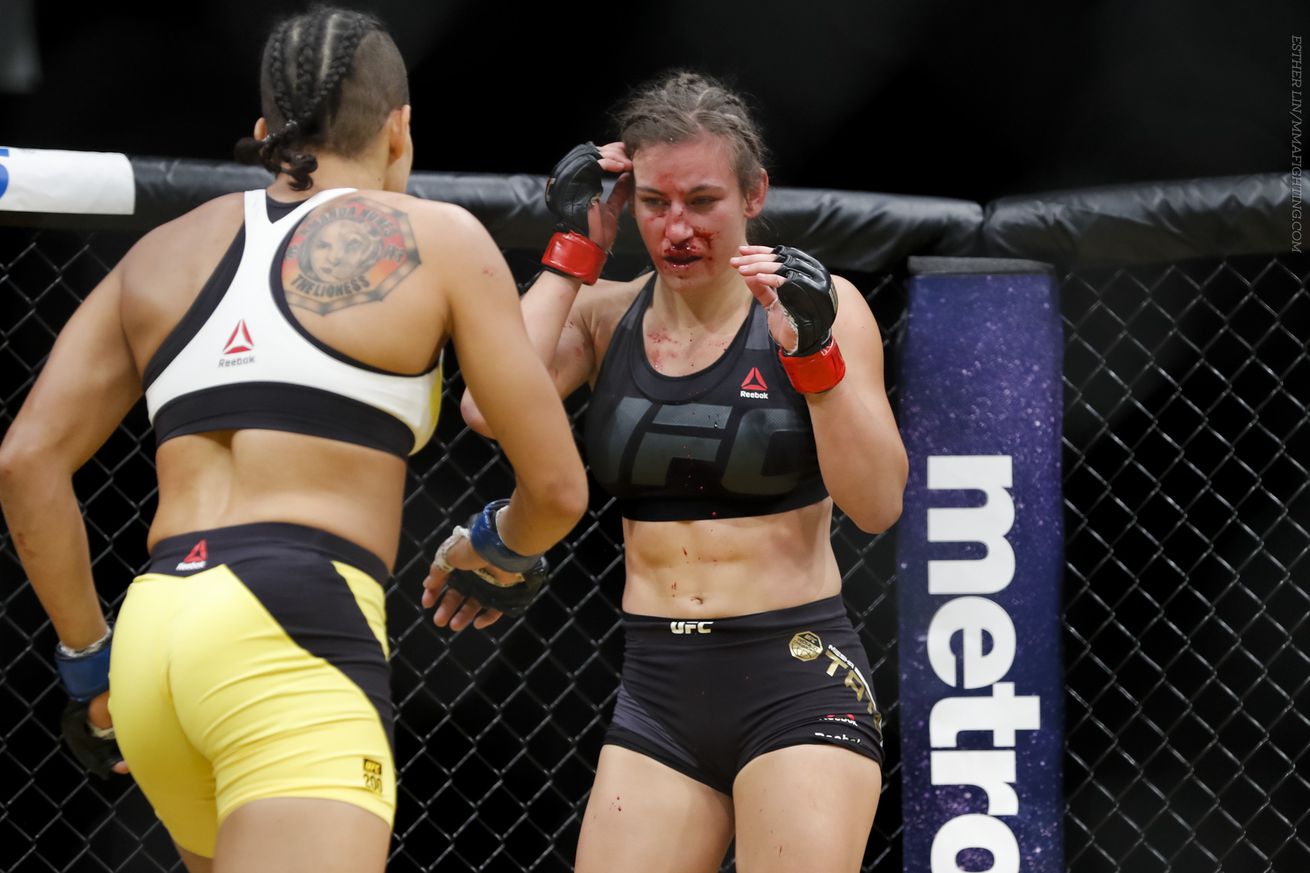 Miesha Tate suffered one of the fastest and most devastating losses of her mixed martial arts career at UFC 200 when she surrendered her UFC bantamweight title to Amanda Nunes via first-round submission. The fight was Nunes’ from the start, as the underdog Brazilian stormed out and shattered Tate’s nose with hard strikes, then tapped out Tate with a textbook rear-naked choke.

And for the Tate, the sting of that loss was a difficult thing to reconcile.

“It was a sh*tty performance,” Tate admitted Monday on The MMA Hour. “I’ll be brutally honest with myself, it was terrible. Worst performance of my career, but I can’t leave that looming over my head. What gives me satisfaction is I know that I’m better than that. I know that was a one-time thing, that I’m never going to let that happen again. It sucks, I’m not happy about it, but there’s only thing that I can do — get back on the horse and give it another go.”

According to Tate, things felt off from the start against Nunes, like she was stuck in the mud before the fight even began. And that feeling came at the worst possible time for Tate, as UFC 200 was setting up to be a coronation of sorts for the longtime contender who finally snatched gold with her dramatic victory over Holly Holm then landed a headlining spot on Zuffa’s bicentennial event at the eleventh hour due to a series of high-profile changes to UFC 200’s main card.

“It was a terrible night to have an off-night, but it happens, and I’m only human,” Tate said. “I’m not perfect, so I went out there and made some mistakes and got caught early, and it is what it is. One loss and one win, neither one defines me.

“I think it was just one of those things, you can’t predict that. I could’ve been on a long layoff and still had the same thing happen. Sometimes, just like I said, life kind of gets in the way and you get too many things going. And it’s not an excuse by any means, but it’s just what happens sometimes. Sometimes you just get overloaded and you just have so much going on that it’s really challenging, and there’s no MMA 101 course of how to do it all. You kind of sink or swim, and sometimes it gets really hard to swim. And that’s just kind of what it was. It was just a lot going on.”

Following the loss, Tate says that she embarked on a road trip across the United States for nearly three weeks with just her and her dog. She wanted to get away and regroup, clear her head of the negative thoughts swirling around the performance and reset her focus on climbing back up the ladder. She ended up travelling to Thailand as well to train Muay Thai, and she credited the extra time away with helping to steel her resolve before jumping back into the fray for UFC 205.

“I think it was important that I let go of that before I went into a training camp,” Tate said. “Because I didn’t want that negativity hanging over my head and dragging me down in my training now. I wanted to be positive going into the next fight, so I think the time that I took for myself was necessary and I definitely think that it helped me kind of get over it, so to speak.”

With the loss now behind her, Tate is scheduled to return to action at UFC 205 on Nov. 12 against Raquel Pennington as part of the UFC’s blockbuster debut in New York.

In Pennington, Tate faces a scrappy opponent whose three-fight win streak has propelled her into the No. 8 spot on the UFC’s media-generated rankings. And even though Tate says the match-up came out of nowhere, she is happy with how things turned out.

“I kind of, for some reason, was thinking (I would get an opponent) like a Cat Zingano,” Tate said. “I was thinking possibly Holly, I was thinking maybe they would try to push Julianna (Pena), maybe they would try to push (Valentina) Shevchenko. But honestly, Raquel, I don’t know why I wasn’t thinking about her. Because really, it’s a great match-up, and it makes sense, and I feel really honored honestly to have that fight because it shows that the UFC still values what I have to offer by giving me someone who’s on a win streak when I just suffered a loss.

“They’re giving me someone who’s hot and credible right now, and beating girls and doing really well, making waves in the division. That’s the kind of fight that I want. And I didn’t ask for it, I just told them it doesn’t matter who, I just would like to get back in there. The first name that came out of their mouth was Raquel, and I said perfect. No problem.”

While there was little hesitation from Tate to accept the match-up, a fight against Pennington will be different than normal for Tate considering the history the two bantamweights share.

Back in 2013, Tate served as Pennington’s head coach on The Ultimate Fighter 18, helping lead Pennington all the way to the season’s semifinals. She and Pennington have remained friends since, however both know they will need to put that friendship aside once they touch down in New York City.

“We were pretty close for a while. She lives far away, so we haven’t stayed in super close contact over the last six months to year or so, but we’re still friendly and I like Raquel a lot,” Tate said. “She’s a really cool chick, and no hard feelings, but this is business. We are in the same weight division and she’s the one who’s in front of me, so I figure we always knew that was a potential possibility, that it could happen at any time.

“We have trained together before. Obviously I did coach her on The Ultimate Fighter and we’ve had some good heart-to-hearts, and she’s been a great support system for me. I’ve tried to be a great support system for her in various points of our careers. When she suffered that loss to Holly, I was there that night and hung out. She’s a really great girl, and when I lost to Ronda, she was there. So we’ve been there intermittently through each other’s careers and we kind of get it. But I think at the end of the day, it boils down to we both have a lot of respect for each other and we are in the same weight division, we have the same goals, and now is the time when we meet as friends in combat.”