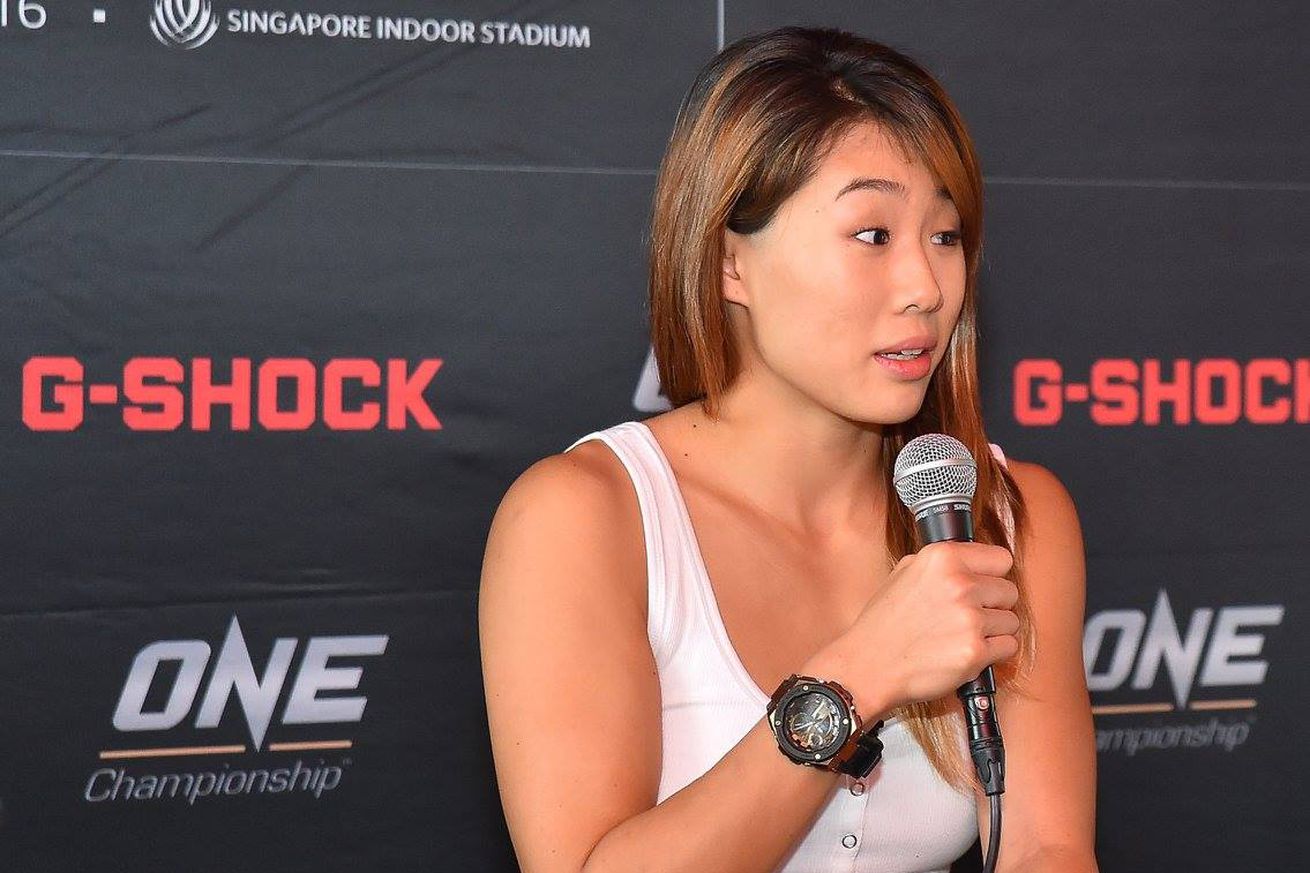 It has gotten to the point now that, just one year into her pro MMA career, Angela Lee can no longer walk down the street in Singapore without being recognized.

“It’s getting kind of tough nowadays,” Lee told MMA Fighting. “I’m getting a lot more people stopping me on the streets and it’s cool. It’s really neat and I enjoy it. The people here, they’re really friendly about it. They’re just really excited fans and I gladly take a picture with them.”

Lee has a lot to process right now. There’s that newfound fame in the country where her father hails from. There’s also a little matter about a big — historic, even — title fight coming up.

On Friday, Lee will be part of the first female main event in ONE Championship history when she takes on Mei Yamaguchi for the inaugural 115-pound title. Lee, whose nickname is “Unstoppable,” has been a phenom for ONE, fighting five times since her pro debut in May 2015 and winning by submission each bout. Her marketability along with her skill, exciting style and charisma have been a boon for her ascent. Lee is a promoter’s dream, and ONE is capitalizing on the opportunity.

Lee, just 19 years old, is trying to do the same thing. Winning the title is a big deal and her sole focus right now. But with the amount of people she has touched in a short amount of time, Lee has a broader sense of future goals. She wants to work for social justice in some Asian countries that are not always kind to women. ONE, the biggest MMA promotion in Asia, gives her the chance to reach those places.

“I want to promote women’s rights here,” Lee said. “We have no voice here. I think getting more people aware of what we can do, what we’re capable of, it’s really gonna change that mentality.

Lee is multi-cultural. Her father is from Singapore and her mother is from South Korea. Lee was born in Vancouver and now the family lives in Hawaii. Lee and her siblings have been training in mixed martial arts — their father Ken and mother Jewelz are lifelong martial artists — since they were out of diapers.

Lee has kept a careful eye on what Ronda Rousey has done in the United States, helping to bring women’s MMA into the UFC and female athletes to the forefront. She’s hoping to bring elements of that to ONE and Asia.

“No matter what anyone says, you want to look at Ronda Rousey and see what she’s done for women’s MMA, the sport of women’s MMA, it’s just incredible,” Lee said. “She took it from when it wasn’t accepted — there was no women’s division in the UFC and she created that whole thing. Big props to her and thanks to her. She just exploded that scene in the states. Definitely I’ve been looking to see all the things she’s done right. I want to bring that over here to Asia and I want to help expand it and grow it just like it has in the states.”

There has been some resistance to her quick climb to the top of the ONE heap, though the promotion is standing behind her. Chairman Chatri Sityodtong wrote in a Facebook post when the bout was announced that Lee vs. Yamaguchi could be the biggest in ONE history.

“Men and women are equal in every way,” Sityodtong wrote. “Full stop. Period. It saddens me that the vast majority of Asian men believe otherwise. I believe firmly that a woman can choose what she wants to do with her life, even if it doesn’t fit society’s definition of what a woman should or should not be. Angela Lee and Mei Yamaguchi are both great examples of female superheroes who will help to lead the empowerment of women across Asia. In many ways, this fight is the most important in ONE Championship’s history because of its historic significance on Asian society.”

Lee has said she has seen cruel things on social media and they have upset her.

She calls the negativity “ridiculous.”

“‘How can an organization put two girls fighting in a main event?'” Lee said she has seen. “I just look at that and think, ‘Wow, what kind of person are you?’ This is the 21st century, man. Women have rights and women can do things just like men can do.”

Most of what Lee said she receives on social media, though, is support and messages from girls or their parents, encouraging her and saying they look up to her.

“That really touches my heart and that makes me realize that what I’m doing here in the sport is bigger than just me,” Lee said. “It’s bigger. I have the power to reach out and influence so many hundreds of thousands of people. That’s just amazing. That’s my main goal — to really make a difference in this world.”

That is for the future. For now, Lee has a very experienced, very tough former Deep Jewels champion on the docket in Yamaguchi. That’s her first priority. The world will have to wait.

“Right now there’s nothing more important to me than winning that title,” Lee said. “However, I do think about long-term goals and what I want to do in this sport and I want to make a difference in this world. So definitely that’s what I think about. But right now, I’m 100 percent focused on getting that title belt.”